In actual performance, the song will go on, as Mufwankolo puts it, until it is just right.2 Now the singing stops after a few more verses and Bwana Cheko backs up one more time to give directions for the scene.

Directions for the Chief's Departure.

In the final performance the play opens with the villagers and notables arriving on the scene.

As was agreed during rehearsals, actors had to look after their the own costumes. Most just brought working-clothes (Malisawa wore a mining-company hard hat). Only the chief and his court had costumes to speak of. The guards had somehow assembled pieces of clothing that looked like uniforms. Two of the notables wore the traditional wraps instead of trousers. The chief, his wife, and the notables wore headdresses made of cardboard. The patterns on these headdresses differed so as to correspond to rank.
The notables sit down on the ground. The drums are played and a young boy in a raffia skirt begins the dancing. He is joined by another boy and by Kalwasha and Malisawa.22

Arrived at the court, the villagers honor the chief with a dance
(click thumb nail to view full-size image in separate window - 44KB)

Then the song is changed. The lead singer intonates Muite, muite, Mufwankolo wa mitenga eeyo..., Call, call Mufwankolo and his plumes... The notables rise as the chief arrives together with his wife. Shebele, playing a guard, fans the chief while he is greeted by the notables. Then one of the boys dances before the chief, followed by a couple.

Eventually, the singing stops with a greeting called out by Bwana Cheko and a response from actors and spectators. He pauses briefly, then announces the chief:

Mufwankolo gets up and faces the villagers. He is in full costume: An (imitiation) chief's headdress, an old dress coat over a red ankle-length wrap, an animal skin worn like an apron, a ceremonial hatchet over his left shoulder, a fly whisk in his right hand, beads and medals around his neck and on his chest. 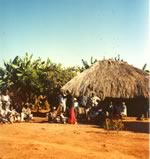 After this the chief and his immediate entourage leave. The villagers begin a song: Twamuleta lelo... Some of them dance.

1 At this point the leader of the song begins to recite the names of the cast.
2 The expression he uses is inakolea, from kukolea, "to be properly seasoned, have a flavor". Later, the verb is also used in its causative form, kukolesha wimbo, "make the song sound really good".
3 Throughout the transcription, French items are marked by italics. Comments and explanatory remarks appear between square brackets. Incomprehensible words or phrases are signaled by ...?...
4 Kufukama comes from Luba (see van Avermaet and Mbuya 1954: 161, where the meaning is given as "to kneel"). It refers to the proper way of greeting a chief: eyes cast down, back and knees bent, while clapping one's hands. The latter is called kupopwela (van Avermaet and Mbuya loc. cit. 536), which is distinguished in Shaba Swahili from clapping hands as a sign of applause (kupiga mikono).
5 The verb twakwimuna, first person plural, is probably of Tshiluba or Songye origin and means "we greet you." Vidyee is a honorific term for the chief.
6 This refers to the famous chanteurs de la croix de cuivre, a choir lead by Fr. Anschaire Lamoral. This song comes from their repertoire.
7 Meaning: "All dressed up". A witty but somewhat obsolete expression, since neckties were prohibited in Zaire as "anti-revolutionary."
8 A clumsy paraphrase for the expression kupiga bikelekele. This is a piercing, trilling sound produced (by women only) by crying in a high voice, with the mouth closed, while rapidly touching, or rubbing, the lips with the right hand (the side of the index touching the lips). From now it will only be indicated by "ululation" or "ululating."
9 The image used in the original is that of sifting a lot of flour, kunyungulula mabunga.
10 Here the speaker himself announces a code switch. The reason may be emphasis (as in this case); sometimes it is meant apologetically ("sorry, but I must say this in French...").
11 Tubuyi consists of the plural form of the diminutive prefix ka- and buyi (ECS uji), a porridge or soup of cereals.
12 A formula of condemnation, in Luba (Kiluba or Tshiluba). The emphasis here (and in few other places) marks a feature of oral rhetoric: A speaker frequently seeks and gets response from the audience in the form of completion of words or sentences pronounced. This need not involve turn-taking as the speaker's utterances are joined by the audience. Intonation, context, and semantic clues enable the audience to "speak along" even longer phrases. This device is commonly used in political and religious speeches; it can also occur in all sorts of narratives and certain speakers who seem to use it habitually.
13 S(h)impundu is a father, nampundu a mother of twins (probably from Bemba). The twins are mampundu. Other expressions used are mama/baba wawili (Swahili) and mampasa (?Ndembu) or mwambuyi (Luba).
14 This is a proverbial expression current in Shaba Swahili (and beyond). Sense: A chief must in everything he does or orders done consider the consequences for the people.
15 Meaning: come on, ululate.
16 This is a title of honor, giving the chief additional authority.
17 Meaning: you will be punished otherwise.
18 In a letter of May 30, 1988 Bwana Cheko and Kachelewa render text and (French) translation as follows:

19 Kuchola (ECS kuchora) literally means "to carve, mark, inscribe". It evokes an expression used in talk about soccer: kuchola then means "to dribble", "to pass cleverly" -- what it takes to make of soccer a work of art. Extending this, it can also mean "to avoid a person, side-step something". Here, banachola refers to an artful performance of the song by several persons.
20 Kwuipaila, probably of Bemba origin, is used, like kuchola (see preceding note), in football language where it designates a way of skillfully stopping the ball. In other words, its meaning here is not just "to end" the song but to do it nicely.
21 Meaning: you keep on humming the song as you leave.
22 This was during the live performance. In the television broadcast the opening was as follows:
A song (not identified) can be heard throughout the sequence of graphics and pictures.
Graphics: Le groupe Mufwankolo de Télé-Zaire vous présente
Image: A take of the village road leading up to the site of filming; the party of villagers from Kawama celebrating the birth of twins is shown dancing toward the camera.
Graphics: Le POUVOIR se mange entier.
Image: Another view of the street, a toddler dances, then the camera sweeps the villagers lining the street, sitting or standing.
Graphics: Mise en scène KABEYA MUTUMBA
Producteur Délégué WAZENGA LINGA
Image: A take of an old man (the owner's father) sitting in front of the house which served as backdrop to the scenes at the chief's court.
Graphics: Réalisation SHANGO ONOKOKO.

23 Two recordings of the final performance are available. One I made myself under less than optimal conditions. Most of the time I was too far away from the actors. On the other hand, because I was in the audience, my recording contains some of the reactions of the people around me. The other one is a copy of the soundtrack from the video cassette. It too is of poor quality (mainly because of the placement and handling of microphones by the TV crew). The transcription of this text has been made from both recordings with audience response, except for general reactions recorded on the soundtrack, left out.
24 In texts of the filmed performance "all" includes both, the audience within the play and (in varying degrees) the people of Kawama village.
25 The proper form, addressing an audience, should be kumielezea (with the second person plural pronominal affix -mi-). Instead, Mufwankolo uses the third person -wa-. This is either a slip on his part or, more likely, it reflects a merging of the two affixes in Shaba/Katanga Swahili.
26 Basongakazi and basongalume, derived from Luba, are terms occasionally used in Shaba/Katanga Swahili for unmarried women and men respectively. In Kiluba, the verb kusonga has a more specific meaning. It refers to the right one acquires to a woman by paying the bridewealth or some other ceremonial gift (see Van Avermaet and Mbuya 1954: 631).
27 Tabu is the Shaba/Katanga Swahili form of ECS adhabu. In ECS the latter is in phonological contrast with adabu, "politeness". Such a contrast is not available in Shaba/Katanga Swahili, hence adabu "politeness" vs. tabu, "a fine, punishment".
28 Adding "on top of it" is to convey something of the original phrase: na mayi ananyayupo. Normally one would say na mayi anakunywa. -po is a demonstrative locative particle which would be redundant, except if the speaker, as is the case here, wants to give the phrase a comical turn -- a sort of grammatical exaggeration.
29 This is the moment when, in the television broadcast, I appear for a few seconds on the screen.

Copyright notice:
These texts from Power and performance were made available online courtesy of The University of Wisconsin Press
© 1990, renewed 2001 The Board of Regents of the University of Wisconsin System
Deposited at APS: 9 July 2001
Revisions: 24 August 2001(APS Volume number added), 2 October 2001 (photos added), 31 October 2001 (ISSN added)